In a heavy ormolu frame with projecting corners and garlanded wreath surmount, 7.8cm.
The Empress is depicted wearing the chain and star of the Order of Saint Andrew and the sash of the Order of Saint George. She presented the miniature to Lord St. Helens in 1787 upon his departure from Russia as Envoy Extraordinary to the Court of Saint Petersburg. He gave it to Henry, 10th Earl (and later 1st Marquess) of Exeter, in 1795.
Dmitry Levitsky (1735-1822), a Russian Ukrainian was the son of a priest; an amateur painter and engraver who provided his son’s first art lessons. Levitsky later became a member of the Imperial Academy of Arts, where he both taught and exhibited. He also received several commissions from the Empress. 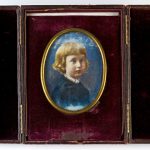 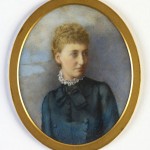