The gold cagework mounts of this fascinating box are chased with a key pattern and include a scroll-engraved applied thumbpiece, 7.5cm wide.
An accompanying label is inscribed: ‘This snuff box is made of Lava from the Island of Iskia near Naples’; also containing three ‘Pieces of Pompey’s Pillar – A present from Capt. Bell of Lincolnshire, January 20th 1797 – He received them from Major Budgard, who had them from the Captain of the ship, who received them from the Sailors who drank a bowl of punch on the top of the Pillar’ 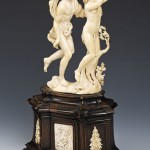