A pair of porphyry urns and covers, Roman, 17th Century.

The urns are 30cm high, with gadrooned covers and lower sections. They appear in the Burghley Inventory of 1763: “The Library … two porphry vases.”
Porphyry is a type of igneous rock, the term itself deriving from Ancient Greek, meaning purple. Purple was an imperial colour and the deep purple, so called ‘imperial’ porphyry, came to be widely used for tombs and monuments in Ancient Rome. The rock itself was thought to be the hardest in antiquity. 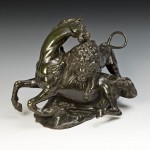